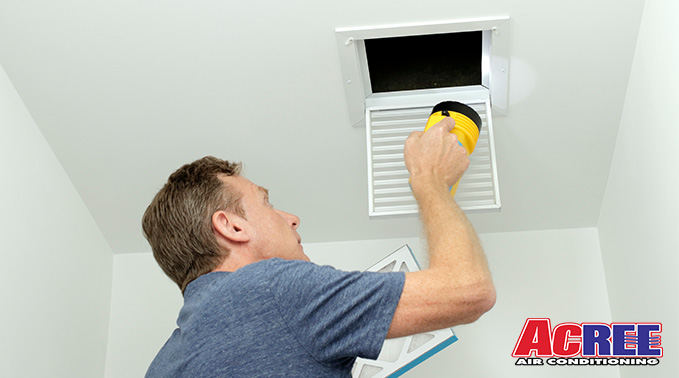 Ducts don’t get quite the same level of attention that other aspects of our heating and cooling systems do. Since they’re tucked out of sight and don’t directly generate the warmth or cold air that the HVAC unit itself does, we can neglect them. But they’re just as important to the comfort level of your home, if not more so.

It’s tough to know when you’ve got an immediate problem on your hands. The issue at hand may be something you can ignore for a bit, or it could be something very serious. How do you know which is which, though? The experts at Acree Plumbing & Air are here to help you figure that out!

If your ducts are operating as they’re supposed to, then the airflow should be consistent. You won’t notice a drop in quality since the ducts are free of obstruction and still intact. But eventually you could begin to feel like something has changed.

Maybe the air isn’t as powerful as it usually is, or perhaps the coverage has gotten spottier. Should the airflow return to normal, then you likely don’t have anything to worry about. It might be worth an inspection just to make sure, but you should be good.

However, if it remains inconsistent for an extended period of time, call someone. Something is wrong, and only a professional will be able to totally solve your duct-related issues.

Leaks can be some of the most difficult problems to pinpoint. Unless they’ve opened up a massive leak, you might not even notice it at all. Where you’ll begin to really see the effects, though, is in your energy bill. Your HVAC system will have to work harder to account for the difference – meaning higher bills for you.

When the leaks are small and unnoticeable, you’re more or less okay to sideline the issue. But it’ll always be in the back of your mind, and you’ll need to deal with leaks sooner or later.

Since your ducts’ job is to funnel air through to your vents, they’ll understandably receive a lot of dust, dirt and other particles. These things add up, and over time they’ll start to stick. While this is in its early stages, you probably won’t notice a difference.

But after too long, the excess dust and dirt will obstruct airflow and potentially impact your air quality. It’ll float into the airstream and enter the circulation system, meaning it could harm you and your family’s health.

From the moment that you notice dust/dirt/etc., change the air filter and call an expert.

When your ducts are on the fritz, don’t waste time! The longer you let problems linger, the worse and more expensive they can become. With Acree Plumbing & Air’s help, though, your duct problems will be a thing of the past in no time. Our experts will develop a comprehensive solution to combat whatever’s causing trouble, and we’ll make sure we fix it the first time.

Fill out the form below and we’ll reach out to schedule your service appointment.